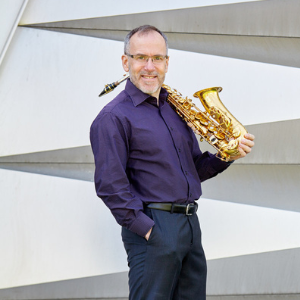 Acclaimed internationally for his innovative style and musical virtuosity, Yamaha and Vandoren Performing Artist Joseph Lulloff enjoys a prolific career as both a performing saxophone artist and teacher. A recipient of the Concert Artists Guild Award, the Pro Musicis International Soloist Award, the Michigan State University Distinguished Faculty Award, and the Withrow Award for Excellence in Teaching from the MSU College of Music, Mr. Lulloff has been featured as guest soloist with numerous orchestras and wind bands both in the United States and abroad, including with the Cleveland, Minnesota, Grand Rapids, and Brevard Music Center Orchestra, the US Navy Band, the Dallas Wind Symphony, the Moscow Contemporary Music Ensemble, the Bayern Polizei Orchestra and numerous university groups from throughout the USA and Canada. He has concertized extensively throughout North and South America, Europe, and Asia, performing at several music festivals including the Ojai Festival, the Lucerne Festival, the Moscow Autumn Festival, and the Ravinia Festival, and notable venues such as Carnegie Hall, Disney Hall, Weill Recital Hall, and the Smithsonian Institute. Mr. Lulloff has also served as principal saxophonist with the Chicago, Cleveland, Detroit, Minnesota, and St. Louis Symphony Orchestras.

He holds the position of Professor of Saxophone at Michigan State University where his students have won multiple prestigious national competitions. Alumni of his saxophone studio have found success in a variety of performance and pedagogical fields, from performing with the nations top military bands to teaching at notable music schools at universities throughout the country.

Equally at home in the realms of classical and jazz performance, Mr. Lulloff holds the alto saxophone chair with the Capitol Quartet. During summers, he teaches at the Great Plains Saxophone Workshop in Oklahoma, the Brevard Music Center Summer Music Institute in North Carolina, along with other music festivals throughout the United States and Europe.